Colonel Louis Watres was a partner in the Paupack Power Company and the Wallenpaupack Power Company. These companies purchased land in Wayne and Pike counties needed to create Lake Wallenpaupack. Colonel Watres later sold the land  to a group of investors. About 12,000 acres of land was needed in  order to complete construction. The land was bought at approximately $20 an acre from about 100 landowners. 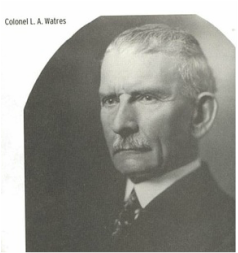 PPL aquired the land and hired Phoenix Utility Company to do the construction. In completing the project, they rerouted 27 roads,     removed 2 bridges, and deconstructed the entire village of Wilsonville. The construction began in 1924 and two years later PPL opened Lake Wallenpaupack up for the public.