(Adelges  tsugae)
An introduced aphid from Asia, this insect builds up populations on hemlock trees and eventually will weaken the tree to the point of mortality.

The aphid can be identified by its white egg sacs, which resemble small clusters of cotton clinging to the underside of hemlock branches. The hemlock wooly adelgid feeds on the phloem sap of tender hemlock shoots. It may also inject a toxin while feeding. The resulting desiccation (extreme dryness) causes the tree to lose its needles and stops new growth. 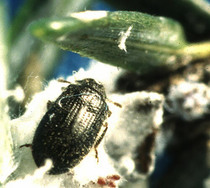 Cold and icy winters will slow the growth of the insect population. However, moderate winters allow populations to build up threatening the hemlock population.