What is the difference between a field and a meadow? A field is used more often to describe an area managed by people. The field before you was once an orchard and pasture belonging to a farmer. A meadow is used to describe a wild area.

Fields and meadows start when trees have been removed from an area. This can occur naturally with a forest fire or flood, or humans may cut down a forest. Seeds from grasses and weeds take root shortly after and a meadow is born.

Both fields and meadows are open areas with few or no trees. Grasses, and wildflowers are usually the dominant species. Only a limited number of shrubs and trees are present. When allowed to grow larger shrubs will take over a meadow and after years become a thicket. Thickets become forests as tree species take root. This natural process is known as succession. 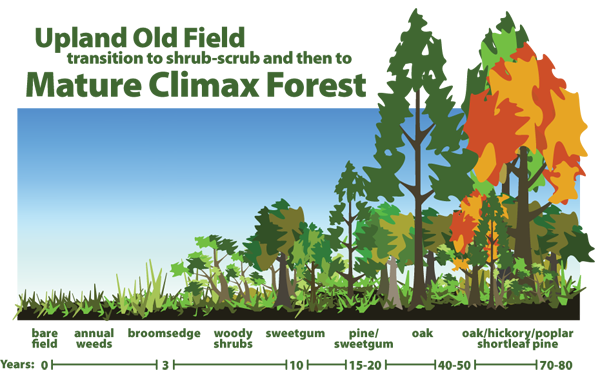 Vegetation in fields and meadows:

Grasses
Most meadows have lots of grasses. Other plants grow there too, but grasses are the main plants. They don't look the same as grass in a lawn because they are allowed to grow wild without mowing. Grasses in a meadow grow tall and get small flowers and seeds. Grasses provide food and shelter for small animals, such as meadow voles. 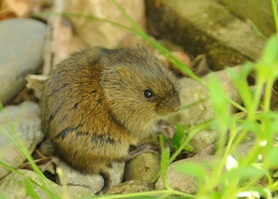 Meadow Vole
Wildflowers
Other plants grow among the grasses. There isn't any real difference between a wildflower and a weed. Both have stems, leaves, and flowers. "Weed" is a term people use to call an unwanted plant that grows in a garden or lawn. Wildflowers and "weeds" attract many insects and other animals. 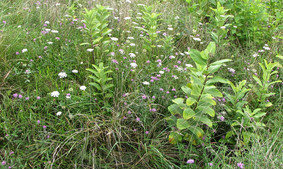 Just because shrubs and trees aren't the main plants in a meadow doesn't mean there aren't any. Most meadows have at least a few of these while a few meadows have many but they are spaced out. Trees and shrubs look different in a meadow than they do in a forest. In a forest trees compete with each other for light. This makes them grow up instead of out to the sides. Most of the leaves on a forest tree are at the top. In a meadow, a tree gets plenty of light. This means it will grow shorter and wider.