A food web consists of multiple food chains in an ecosystem. That is, each living organism is a part of a food web, and each food chain is a possible path towards energy and nutrients for that specific organism. 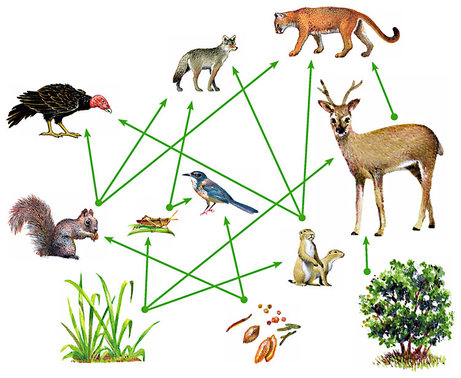 Organisms in food webs are grouped into categories called trophic levels. Roughly speaking, these levels are outlined by what an organism eats.
First level -- Producers also known as autotrophs make their own food and do not depend on any other organism for nutrition. Most use a process called photosynthesis to create glucose using energy from the sunlight, carbon dioxide, and water. Algae, plants, and phytoplankton (tiny organisms that live in water) are autotrophic.﻿﻿

Fourth level -- Tertiary consumers eat the secondary consumers. An example of this would be an owl preying on the snake.
Decomposers make up the last part of the food chain. Detritivores are organisms that eat nonliving plant and animal remains. For example, scavengers such as vultures eat dead animals. Dung beetles eat animal feces.

Decomposers, like fungi and bacteria, complete the food chain. Decomposers turn organic wastes, such as decaying plants, into inorganic materials, such as nutrient-rich soil. They complete the cycle of life, returning nutrients to the soil or oceans for use by autotrophs. This starts a whole new series of food chains. 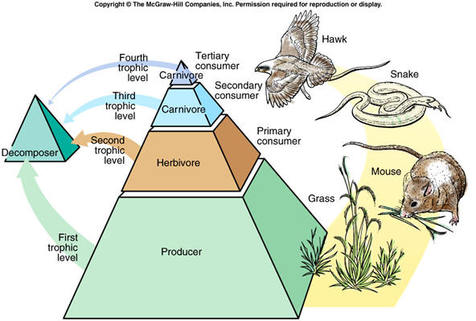 Food webs are defined by their biomass. Biomass is the energy in living organisms. Autotrophs, the producers in a food web, convert the suns energy into biomass. However, biomass shrinks with each trophic level. That is because between 80% and 90% of an organism's energy, or biomass, is lost as heat or waste. This means that a carnivore like the wolf only consumes the remaining 10-20% of biomass. 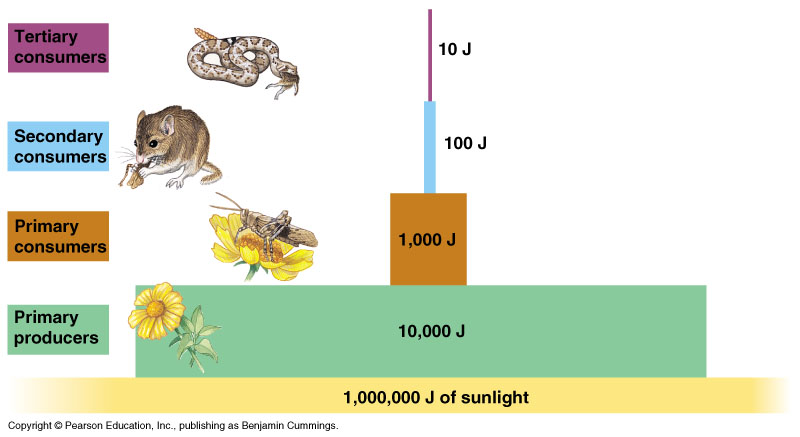 Biomass declines as you move up through the trophic levels. However, some types of materials, especially toxic chemicals, increase with each trophic level in the food web. These chemicals usually collect in the fat of animals.

When a herbivore eats a plant or other autotroph that is covered in pesticides, for example, those pesticides are stored in the animal’s fat. When a carnivore eats several of these herbivores, it takes in the pesticide chemicals stored in its prey. This process is called bioaccumulation.